It is certainly humbling to trawl through the expansive archive of original work on Maritime Marionettes’ website. Founded by husband and wife team Heather Bishop Taylor and Darryl Taylor in Truro, Nova Scotia nearly 30 years ago, Maritime Marionettes is the quintessential Mom and Pop puppetry company.

From “Petrouchka – a Musical Marionette Ballet”

Heather’s interest in puppetry began at age 11 and she has developed her beloved childhood hobby into an impressive career. After receiving her Bachelor of Arts in French at Acadia University, she went on to study theatre at Dalhousie and take the Foundation year at the Nova Scotia College of Art and Design. All of her studies in music, theatre, French and art have been adapted and directed toward her love of marionettes. Darryl developed an interest in marionettes after working primarily with hand and rod puppets. He comes from a strong family tradition of music and storytelling, and has brought these skills to bear in creating the music as well as original scripts for several of their productions. The couple struck out on their own after apprenticing with David Syrotiak’s National Marionette Theatre in Hartford, Connecticut, where they learned to build and perform shows. To date, they have created eleven shows, in French and English, each production created by Heather and Darryl from concept to finished product.

Their shows are inspired from Children’s literature–from folktales and fairytales to a ballet! Some of the work combines traditional marionette puppetry with shadow puppetry, used to wonderful effect in Jack and The Beanstalk. They have performed at numerous international events and puppetry festivals including the Festival Mondiale des Marionettes, (Charleville-Mezieres, France 1997 and 2000), and Hsin Kang International Children’s Arts Festival, (Taiwan, 1998 and 2003). They have also toured this country extensively from the Yukon Territory to Newfoundland and most places in between.

I had to ask Heather and Darryl a few questions about their work.

T: How many shows do you currently have in your repertoire?

H&D: Currently, we are rehearsed in 5 shows: Rumpelstiltskin, The Lonely Leprechaun, Molly and the Oak Island Treasure, The Bremen Town Musicians, and Jack and the Beanstalk. Petrouchka and the Nativity Story can be performed but we need rehearsal time, as they are special occasion performances more so than what we do in our usual touring.

T: I wonder what advice you could offer to puppet theatre artists working in the Atlantic region?

H: Know that you have a passion for your art form, and continue to be curious and grow and explore throughout your career. Find an accountant you trust and like. Listen to people’s suggestions about any business or artistic decisions, and then take time to decide what is right for you. Be wary of working for low pay or no pay, for the “exposure”. Inflated ego and severe self-criticism will get in the way of your art, they are very sneaky and usually nearby, which is why I need to stay in touch with what keeps me grounded. Stay connected with what keeps you grounded- if that be time in nature, time with your pet, time in prayer or meditation, playing sports, music, or time with friends who really know you, (if you don’t have them, find them!). Be willing and able to travel, to work long days and enjoy the land and scenery you will be seeing. Teach and work with others and learn from your experiences. Ask for help when needed. Follow your heart and listen to intuitions. Watch other puppet performances and all performance arts and connect with other puppeteers and artists. D: Always respect your audience. Learn to secure your own work and get the word out about your work, as you can’t always depend on anyone else to do that for you. Puppetry is a process of experimentation. Be prepared to fail, learn from your failures, and keep moving forward.

T: What has been the greatest artistic challenge in your work so far?

H&D: We have had two major artistic challenges: 1: Producing Molly and the Oak Island Treasure – This was fairly early in our careers and we were working with a big vision for that show. We had many artists working with us and found we spent more time managing than hands-on creating, which was challenging. Financially we were quite over-extended, and we were trying to do a magnificent project with every idea we had at once. The show turned out to be quite beautiful and we still perform it, as people are very moved by it. We learned from the process to try to keep it simple. 2: Producing Petrouchka for the Lubbock Texas Symphony was our most challenging project, as it is done almost entirely to music with a cast of 23 marionettes. Thanks to the choreography of Mary Lou Martin though, we developed lovely dance moves for the marionettes in each Tableau.

T: What’s been your greatest business challenge so far?

H&D: Our trip to Dubai was the riskiest business challenge of our careers. The clients requested the five shows in our repertoire, to be rotated over a period of 2 weeks. The engagement came up in very short notice, and we left the country a week after shipping our puppets by air cargo. We realized that if anything happened to that shipment we would have lost our livelihood, and would have needed to build a new show to get going again. We would not ship all our shows at once ever again, but it was a great experience all in all, to perform there and to see that part of the world.

T: What has been your greatest accomplishment in your work?

H&D: The highlight of our performing was presenting Petrouchka at the 100th anniversary of Les Ballets Russes in Monaco, 2009. We were so honoured to hear the ballet dancer’s enthusiastic observations about the choreography and moves of the marionettes. Princess Caroline of Hanover, (daughter of Grace Kelly and Prince Rainier III), came to see our show and requested a private audience with us after the performance. She was friendly and gracious. We brought our marionettes to meet her and she eagerly accepted the opportunity to try one. She showed a boldness and playful sensibility with the marionette that impressed us. She chose to come to our evening performance from the recommendation of her daughter Princess Alexandra, who had seen Petrouchka at school. This was all a surprise to us as well as the organizers of the festival. We received three curtain calls from a most appreciative mixed audience of children and adults, and felt so proud of our work.

Many thanks to Heather and Darryl of Maritime Marionettes for taking the time to engage with me, and for sharing their lovely work, and their very valuable insight and experience! Check out their website for a list of links to samples from their many shows: http://www.maritime-marionettes.com/ 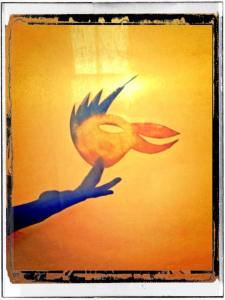 UNIMA Atlantique Update – Tara Manuel Tara Manuel is very glad to have a summer work home in the Fine Arts Building at Memorial University’s Grenfell Campus in Corner Brook, NL. She is in the process of developing a new original shadow puppetry play for young audiences called Strange Blood. Its’ central themes have to do with interconnectedness, sustainability, communication and working together. She is experimenting with new materials for building shadow puppets, and planning to create a multi-layered world for them to inhabit. She hopes to have a rough first version ready to share at the end of the summer. 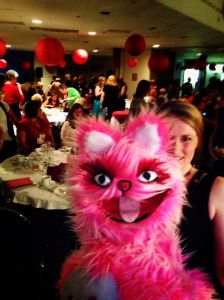 She will also be holding a “Puppet Slam Workshop” group for teenaged youth through the summer during which they will explore building and performing with different styles of puppets for local live shows and web videos. And to make her work therapy summer complete, Tara will be directing the shadow play passages for an inter-arts performance piece with Gros Morne Summer Music, NL’s Classical Music Festival.

Friday July 10 at 4:30pm Wolfville Farmers’ Market (Elm Street)
Open to the public. Followed by Q & A with the company and the publisher

This production was a big hit at the recent St. John’s Storytelling Festival and it really is a show for all ages — three to 93! At the Storytelling Festival the three year olds were as captivated as the older children, the teenagers and the adults. Andy Jones, of course, always seems to draw the whole audience into a story.

The performance is about a half hour in length and it involves Andy Jones telling and acting out the story beside a kitchen-table sized box that is the set – the set has compartments that open and the box is turned around to create a different scene for parts of the story. Darka Erdelji brings the hand-held puppets to life during the storytelling and there are some live sound effects to create a magical atmosphere. It is a very sweet show and elements of Christmas are included.

The show features puppets by Slovenian Theatre Artist Darka Erdelji, who has her Masters in Puppetry and Andy Jones tells the story of Jack in the Queen of Paradise’s Garden. “Jack” is a well-known figure in traditional Newfoundland fairy tales – (Jack Meets the Cat) and these are stories which Andy has learned over the years from an older generation of Newfoundlanders that he turns into wonderful theatrical storytelling productions. The story is a free adaptation of a tale told by Albert Heber – Keeping of Grand Bank, which he got from Billy Quann of Sagona Island; Keeping’s version was published in Herbert Halpert and John Widdowson’s seminal collection, Folktales of Newfoundland.

The Mixed-up Chameleon catches the fly!

Mermaid Theatre of Nova Scotia’s signature production will return to the People’s Republic of China to undertake an ambitious five-week tour to thirteen major centres. Regarded as one of North America’s favourite family shows, The Very Hungry Caterpillar & Other Eric Carle Favourites will appear at the Inside Out Theatre in Beijing from July 15 – 20, 2015 followed by performances in Jinan (Shandong), Shanghai, Nanjing, Ningbo, Changzhou, Wenzhou, Changsha, and Shenzhen.

Arrangements for the engagement have been facilitated by the Shanghai International Arts Festival Public Relations Company.

This entry was posted in Journal, Update. Bookmark the permalink.