The Moncton-based company, Le Théâtre Alacenne, has announced the launch of a bilingual puppet production entitled LA TERRE – THE LAND and wishes to acknowledge the collaboration of Mermaid Theatre of Nova Scotia.

La Société promotion Grand-Pré, through support of Parks Canada and Canadian Heritage, will host the twenty-minute production in an intimate theatre situated in the Visitor Centre of the Grand-Pré National Historic Site. The play will be presented every Tuesday to Saturday from 2 July to 25 August 2016 at 10:30, 12:30. and 1:30 PM.

The play follows the story of Rita, a muskrat, and Charles, the seagull, a long-time married couple who cross the ocean to seek adventure in new lands. Anika Lirette wrote the script, and co-directed the piece with Jim Morrow. Music was created by Jean-François Mallet. The talented university students who have learned the art of puppetry include Franziska Glen, Ryan Myers and Ana Martin, along with stage manager Jamile Smith.

From May 27 to June 4, 2016 I travelled to San Sebastian, Spain, to attend the UNIMA XXII Congress and Festival, and to represent UNIMA Atlantic as its President and UNIMA Canada as a voting Councilor. I previously attended the Festival in 1988 in Japan, and 1980 in Washington, DC, as performer for Mermaid Theatre of Nova Scotia.

During my first two days in San Sebastian, I participated in a symposium at the historic Palacio Miramar on the history of Spanish puppetry and in particular the ‘maquina real’ or ‘royal machine’. This event was supplementary to the Festival and Congress and attended by fewer than fifty people but I found the experience very informative as it gave those present a rare opportunity to explore the richness of Spanish puppetry.

We learned that the most unique feature of this history was the creation of “royal machine,” an almost unknown phenomenon until recently, but an invention of great social and historical significance in the territories of the Iberian Peninsula (including Portugal), Latin America (Mexico, Peru, Argentina) as well as the territories that were part of the Spanish monarchy, such as Belgium and Italy. The “royal machine” is considered a marvel of the first importance in the history of European puppetry, and the International Symposium provided a stimulating forum for researchers, specialists and scholars from a number of countries to share their knowledge and enthusiasm for the topic.

Following the Symposium, three hundred international delegates gathered during the day in the neighboring town of Tolosa to participate in the Congress, and returned to San Sebastian in the evenings to attend a number of world-class puppetry performances in the city’s many excellent theatres. We also spent the late evening hours together in a reception space to view smaller shows from around Spain and, in particular, those from the Basque region. In this way, delegates were afforded the time to meet one another in an intimate setting and the opportunity to discuss matters related to puppetry and puppet/objet theatre.

The four days at the Congress were long and sometimes intense. The meetings were simultaneously translated into the three official languages of UNIMA, English, French, and Spanish. There were between forty to sixty countries represented and Canada had a delegation of five – four from Quebec and me. Of the five, three of us (including me) were voting members and were expected to consider a number of issues including the election of new Councilors, the President, the Treasurer and the new Secretary General, as well as agenda items pertinent to the future of the organization. One of these was the ongoing work of the many Commissions set up to deal with matters relating to puppetry and its positive affect on communities and cultures. Just prior to our arrival, two local Basque puppeteers had been imprisoned for their political views, leading to animated discussion centering on the importance of human rights and freedom of speech.

Each night, at the conclusion of the Congress sessions, we drove a half hour on three busses back to San Sebastian to catch the performances. They included: Red Earth Revisited from South Africa; Animare from Japan; Oscar, El Nino Dormido from Spain; Les Funambules from Sweden; Spartacus from France; I Sisyphus from Bulgaria; Peregrinacao from Brazil; and the outdoor spectacle, Pedaleando Hacia El Cielo from Belgium. My favourite by far was the quirky, dark, and superbly designed and performed, Spartacus.

My trip to Spain provided an excellent opportunity for me to immerse myself in the exotic Basque culture, to meet new colleagues, to become inspired by the wonderful performances, and to promote Mermaid Theatre, UNIMA Atlantic, UNIMA Canada, and Nova Scotia. I’m confident that the experience will pay significant dividends as we move forward to promote the art form here in Atlantic Canada, and extend my personal as well as Mermaid Theatre’s appreciation to the Artistic Innovation Program for the support, which facilitated my participation.

An update from Shadowy Souls Inc.
With investment from NLArts, Tara Manuel and her partner Michael Rigler are currently developing a new puppetry play for young audiences, tentatively entitled Strangeblood. Tara will be traveling to Brussels in August to undertake a two week puppet creation and performance technique workshop with Natacha Belova. The workshop will host 15 students from around the world and will facilitate the creation of life sized held puppets with a body that is one with its manipulator.

We welcome the Newfoundland Puppet Collective to UNIMA Atlantic.  The Collective is a group of visual artists, performers, storytellers, educators, and anyone interested in puppets devoted to the practice of puppetry arts within the unique and distinct cultural environment of Newfoundland. 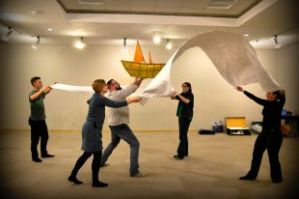 Members of the Newfoundland Puppet Collective, including Baptiste Neis (right), are facilitating workshops in puppetry, with the goal of presenting a show at the LSPU Hall at the end of July.

The Newfoundland Puppet Collective invites community members to come create a show. No prior experience necessary.

From July 18-July 29 in the afternoons Newfoundland Puppet Collective will facilitate sessions in the design and creation of large-scale, illuminated puppets. In the evenings exploratory exercises in puppet articulation, mask and story devising, are being offered. Workshop facilitators include Dave Lane of the Old Trout Puppet Workshop, our own Andy Jones, Baptiste Neis, Mary Fearon, Ruth Lawrence, Kathleen Parewick, Sara Tilley, and Pia Banzhaf.

Through this workshop process participants will be further developing Jack and the World’s End Water a hilarious adaption by Andy Jones and Mary Fearon that premiered at the Lantern Festival in 2015. The exploratory work developed will have an indoor showing at the LSPU Hall on Friday, July 29 and then an outdoor showing, the following evening, July 30 as part of yearly festivities at Victoria Park. Stipends will be provided for core participants.

Generously Supported by The Canada Council For the Arts and Arts NL and City of St. John’s.

Added Bonus – Jack Camp
Resource Centre for the Arts and The Newfoundland Puppet Collective have decided to take advantage of this opportunity and offer a camp for kids 8-14 interested in puppetry. Kids will work and play on the big stage at LSPU Hall — each day will be filled with creative expression including improv, acting, and puppet/mask construction, led by our team of professional actors and artists.

Have a great summer, everyone.  UNIMA Atlantic members are reminded that they can send us updates any time about your puppetry-related activities to be included in a future JOURNAL.  Cheers!